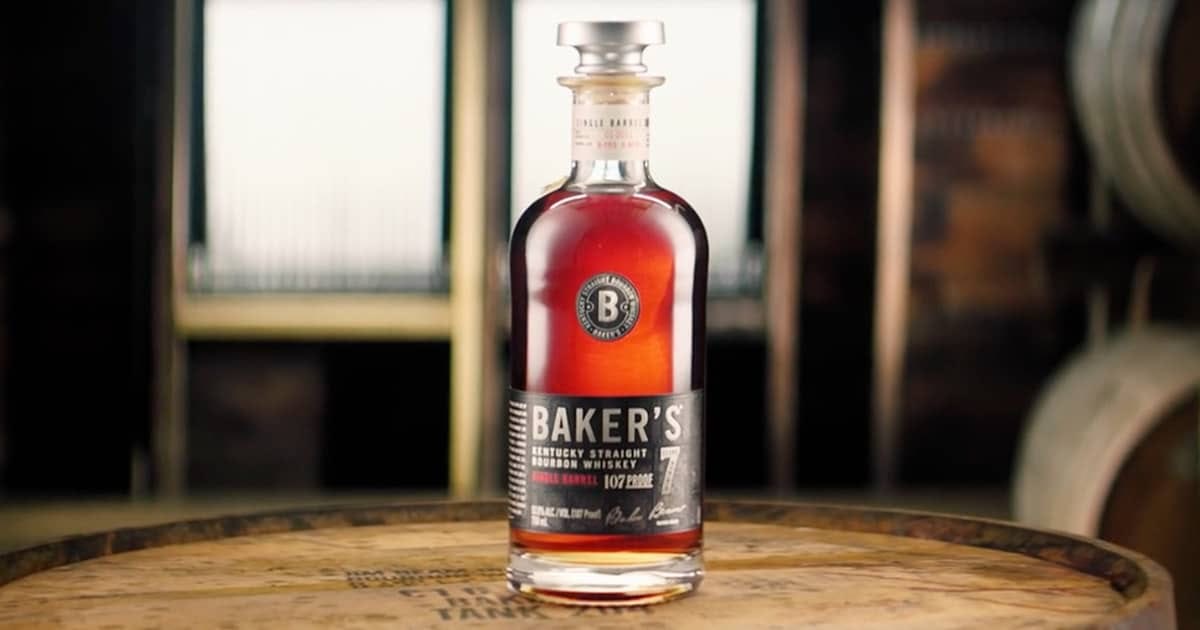 Next to the other prestigious whiskeys in Jim Beam’s Small Batch Collection, Baker’s Bourbon Whiskey is not talked about enough. But don’t worry. We’re expecting this whiskey to become the next must-have bourbon for your collection.

It’s part of the Jim Beam Small Batch Collection along with Booker’s, Basil Hayden’s, and Knob Creek.  This small-batch bourbon is a high-proof spirit that goes great in one of our premium glasses.

Named after Baker Beam (the grand-nephew of Jim Beam), Baker’s was once called Baker’s Small Batch Bourbon. However, in late 2019, Baker’s Bourbon was re-released as Baker’s Bourbon Single Barrel at $60 a bottle. It touts a proof of 107 and a 7-year age statement. So what's the difference between “small batch” and “single barrel”? It lies in the distiller’s insistence that the whiskey comes from a single barrel. (I.e., it's not blended from multiple barrels as it was before.) This makes the whiskey as distinctive as it is smooth.

Not only that but the new Baker’s comes in two choices: the 7 Year Single Barrel and the limited 13 Year Single Barrel. Each has its own qualities, but the age is the main difference, with the older bourbon having a deeper flavor.

This whiskey may be lesser known among Jim Beam’s Small Batch Collection. But it is one of the best the distillery has to offer.

Baker's small-batch bourbon looks amazingly elegant in our Globe Decanter. Your guests will admire and enjoy each pour of the golden-brown spirit as it flows perfectly from your decanter. The night will be born in front of you as you fade into a memory you've yet to make.

This clear, medium amber spirit is a powerful example of what small batch, single barrel bourbon can be. For the newcomers to bourbon, take note: the 107-proof bottle has a bold flavor that may burn going down. But keep drinking to unlock the complex flavors beneath the heavy alcohol bite.

Let's start with the whiskey’s aroma. Baker’s boasts a clean, medium nose with mellow notes of the original grain.  Corn and rye hit strong in the nostrils, followed by mildly sweet flavors like butterscotch and vanilla. As you continue to sniff, you will notice scents of cream and an oak finish on the nose.

Again, the 107-proof alcohol hits at the front of the palate, drawing all the flavors to the back of the throat. However, unlike some high-proof alcohol, it does not overwhelm the flavors. This dry start showcases notes of corn and grain, as well as spices like cinnamon, nutmeg, and white pepper that integrate with oak and vanilla.

But this whiskey also has a sweetness to it. The heavy alcohol start does not hide the sweet, syrupy weight of the bourbon. This gives it a silky-smooth mouthfeel that cradles a leather finish.

Yes, it does burn. But the burn lingers and fades slowly into warm oak notes. The whiskey also finishes with flavors of burnt caramel and spicy vanilla, both of which contrast against peppery spices.

Baker’s is a high-quality bourbon that boasts bold flavors and a high-proof experience. Get it while it is lesser-known because once the word gets out, this whiskey will be harder to find.  And you’ll pay a lot more than its currently reasonable price tag.

Have other thoughts about Baker’s Bourbon? Leave a comment below.