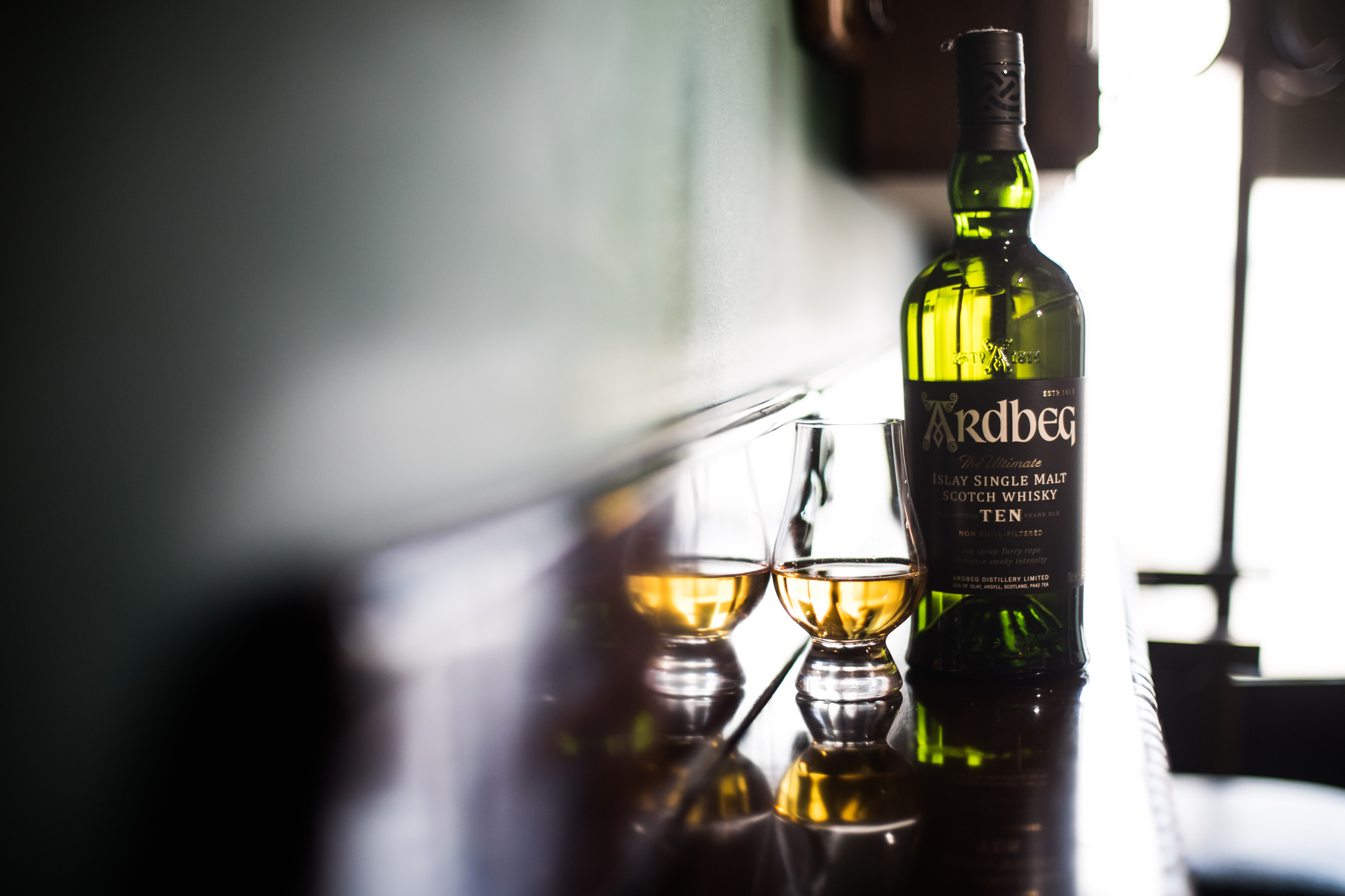 Most whiskies of Islay have a reputation for their medicinal and smoky taste. Ardbeg is no different. That smoky taste is derived from the peat, and this is considered a central characteristic of the Islay malts. This is ascribed to the water and to the peating levels of the barley. This is what causes that “medicinal” flavor most people refer to. Even with all these similar characteristics, Ardbeg manages to stand out, both in taste and presentation. From the Celtic designs on the front of the box to the history lesson on the back to the gorgeous emerald green bottle that houses the delicious, smoky 10-year-old whisky, Ardbeg is the ultimate Islay single malt.

The History of Ardbeg

Pick up a bottle of Ardbeg at your local liquor store, turn it around, and you’ll get a history lesson about the land of Islay. Islay is where Celtic monks found refuge from raiding Norsemen. It’s where early distillers smuggled their illicit ‘aqua vitae at Ardveg’s cove. The history of Islay is Ardbeg heritage, and it is a history to be proud of. As you pour a glass of Ardbeg you will be pouring a glass of Islay history.

In 2015, Ardbeg celebrated 200 years. Those are 200 years of ups and downs. In 1815, Ardbeg was founded by John MacDougall. In 1838, a new owner (Thomas Buchanan) took over, with MacDougall’s son, Alexander, remaining as manager. After Alexander’s passing, his sisters, Margaret and Flora, took over--becoming Scotland's first female distillers. By 1887, Ardbeg was producing the most whisky per year out of all the distilleries in Scotland.

After several years of success the distillery experienced a downfall. In 1981, production dwindled to nothing. For the next 20 years, production at Ardbeg distilleries would have several challenges, resuming two years later and closing again in 1991. The distillery reopened in ‘97. In ‘98, Ardbeg was voted distillery of the year, with more awards, investments and releases to follow. Ardbeg is the untamed spirit of Islay. In Jim Murray’s The Complete Book of Whisky, he states, “Unquestionably the greatest distillery to be found on earth. If perfection on the palate exists this is it.”

How To Drink Your Ardbeg

Ardbeg is a whisky that is not for the faint of heart. Going in, you may find yourself overwhelmed by the curative aftertaste, but you mustn't turn away. Most island whiskies are like that. The first sniff may make you think of a nineteenth-century apothecary; and the first taste, of wood-tinged cologne. While these are beautiful things, your imagination may run wild if your palate is not used to such tastes. In order to truly enjoy a Scotch past the Midlands of Scotland (or any Scotch at all) you must train your palate. Island whiskies tend to have a smoky finish that lies heavy on the tongue. This, along with the medicinal taste, is an acquired one. But once you have it, there is no going back.

An Ardbeg is best enjoyed slowly. If a single malt is usually too much for you, add a cube of ice or a splash of water. If the Scotch becomes cloudy, that is no cause for concern. While some may say that whisky is best enjoyed straight, adding water or ice can bring out some of the flavors, including its smokiness and natural sweetness.

Pour yourself a dram. As you sit at the table with your first glass of Ardbeg, swirl it around and let the aroma of peaty Islay whisky rise from the glass. Bring it to your nose and take in the curative smell known from island and highland single malt whiskies before you sip. Then you are ready to take your first taste of one of the best whiskies—a revered favorite across Scotland and the world.

When you drink Ardbeg for the first time you will find that it is smooth and it goes down easily. That it is smoky and everything that you thought it would be. There is a subtle sweetness that becomes more apparent with each sip, as the peat gives way to the malt.

The second glass of Ardbeg you pour will be even better than the first. You will find yourself enjoying a complex body of flavor with a smooth balance. Once you get a taste for this bold Scotch, you will find it hard to go back to anything else. Ardbeg has an earned reputation as one of the best whiskies in the world and your second glass will solidify why.

The southernmost of the Inner Hebrides, off the west coast of Scotland, Islay is the whisky coast. Ardbeg’s distillery rests on the island’s beautiful coastline. A taste of this delicious Scotch may bring forth notes of the sea. Don’t forget to enjoy your whisky and appreciate every note of the ultimate Islay single malt.

Which bottle should we do a review on next? Leave your ideas in the comments!