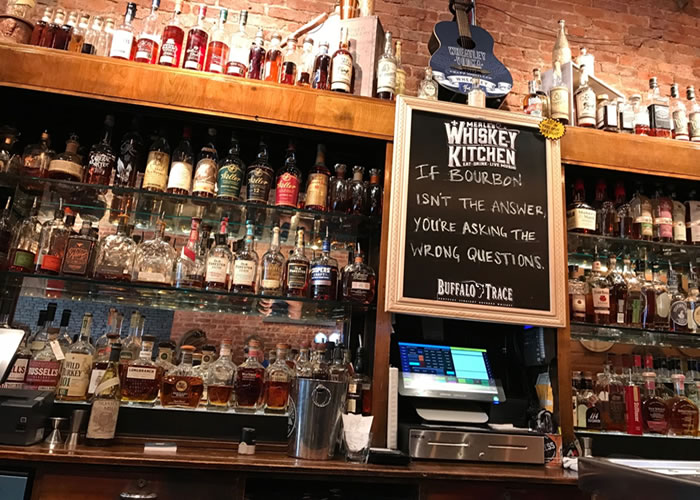 Finding amazing bourbon bars in Louisville has become a special interest hobby for many. So, get out your bourbon bucket list! You’re definitely going to want to add these best ten to it. We’re stoked to highlight these bars for you. Now our bourbon enthusiasts’ favorites can become favorites of yours, too! Maybe you’re planning an upcoming Kentucky Bourbon tour. Or maybe you’re just dreaming of the day you find yourself sipping on bourbon in the Bluegrass State.  Either way, we’re thinking you’ll enjoy hearing about these particular whiskey scenes.

Joining us today, we have Justin @bourbontraveler, Dirk @indianabourbon, Evan @evanhaskill, and Josh @kentuckybourbonjosh. (Give them a follow now. We promise you won’t regret it!) We raise our glasses to you four! And, thank you for sharing your knowledge and opinions with our Prestige fam. Safe to say that this crew would encourage you to settle in with a pour (in one of our whiskey glasses, of course), then read this article with a goal in mind: get to Louisville ASAP!

Get ready, kids. We’re talking bourbon, food, and good vibes all around. You’ll be drooling by the end of this one. And if you’re not, just check out our line of handcrafted decanters. That’ll do the trick for sure.

You need to know about these Bourbon Bars in Louisville! 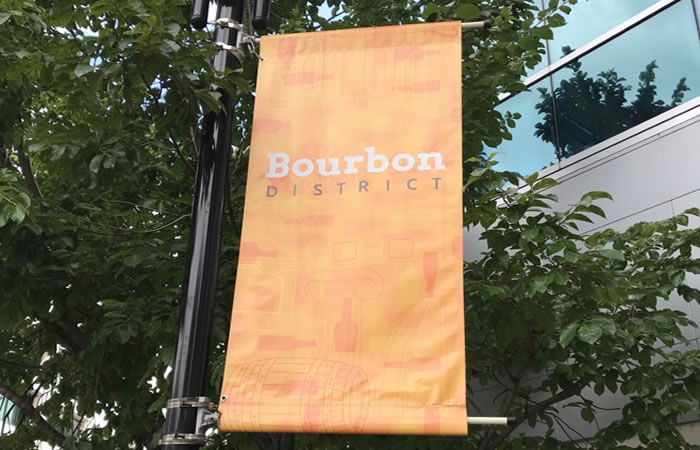 Evan Haskill (@evanhaskill), a freelancer for The ABV Network and The New Orleans Bourbon Festival, is up first with a recommendation for Bourbons Bistro. He highlights the owner upfront: “Jason Brauner is an innovator and luminary in the world of bourbon, not just the bar scene. He’s one of the friendliest and most generous men you will ever meet.” Evan continues, “The selection is unrivaled, the staff and atmosphere are inviting and warm, and the fair prices will keep you sampling bourbons late into the night.”

He adds that the creative, delicious food is purposefully paired well with that liquid gold that Bourbons Bistro is known for. Put this place on your bourbon route for sure. 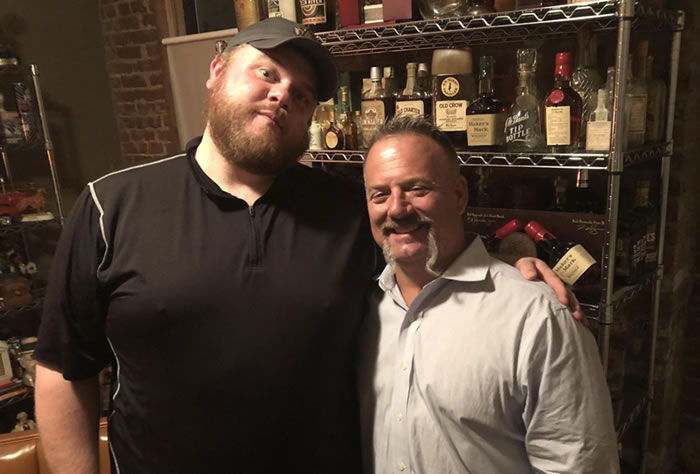 Dirk Fentz of @indianabourbon has a lot of love for Kentucky bourbon.  He also loves KY’s restaurants and bars that are always serving up some of the best, particularly in the Derby City. His top choice for best bourbon bar in Louisville is Doc Crow’s. Dirk says that the place not only boasts one of the best selections of bourbon but also makes an off-the-menu Old Fashioned called the “Bold Fashioned” that’s absolutely incredible. So, yeah. You know what to order. Dirk praises this spot as a whole: “Doc Crow’s is my favorite restaurant in Louisville. The oysters are always great, and if you like nachos and pulled pork, you have to try their Heap’n Chips.” You’ve convinced us, Dirk! We’re down, and we’re coming for ya, Doc.

Justin Nierengarten (@bourbontraveler) hails from Louisville and has impressed us time and again with his passion and expert tips regarding his beloved bourbon town. He’s well-traveled, and we love following his bourbon adventures. He says he gets this question a lot: “Where do I go if I want to try some good bourbon, but I also want to grab a quick bite of food in a laid-back environment?” Here’s his answer:

“Feast BBQ is the solution to all of your problems! Feast BBQ has a couple of locations, and both have delicious food and some unique drinks. First, they have an above-average selection consisting of many low- to mid-priced bourbons, as well as a handful of rotating top-shelf pours. Lately, I’ve been drinking from their Willett Family Estate bourbon bottle.”

“They always have a good cocktail list, and the main attraction is the bourbon slush. Usually, there are a couple to choose from: one is the ‘Ale8One Bourbon Slush,’ and the other is the rotating monthly slush, which is typically creative and delicious.”

Feast truly sounds like the right name for this place.

Justin’s Tip: If you visit in the fall, get the Apple Cider Slush. It’s insane!

Justin and Dirk both highly recommend Haymarket. It was the only bourbon bar in Louisville that raked in votes from two of our enthusiasts. Justin notes that Haymarket is his answer when friends and family want to know where they can find a whiskey bar with a great selection and chill vibe.

“Haymarket’s selection is second to none. They have all of your readily available bourbons, many single-barrel picks chosen specifically by the bar, and your premium top-shelf bourbons like Pappy or Buffalo Trace Antique Collection.”

As for pricing, he notes:

“I would consider their prices fair for the region.” He further recommends checking their social media before you head over: “I have visited on some Tuesdays when they have half-price pours of whiskeys over $40, which is a great way to try some things you wouldn’t otherwise consider paying for.”

Haymarket was Dirk Fentz’s second choice when we asked for his top three bourbon bars in Louisville. He says, “This bar is bourbon heaven!” Fentz tells us that even the most seasoned bourbon connoisseurs can always find something they’ve never had before. One of his favorite features is the “Bottles for Sale” section near the entrance. He ends, “Without a doubt, Haymarket Whiskey Bar is a must-stop for bourbon lovers spending a night in Louisville!”

Josh Salyer (@kentuckybourbonjosh) and his wife recently took a stroll down Whiskey Row, where they visited several bourbon bars and newly-opened distilleries. Their favorite stop “without a doubt” was Merle’s. Josh said the prices and customer service were appealing, and he was pleased to find those hard-to-find bourbons on their shelf: “I hadn’t been able to get my hands on the Old Fitzgerald Bottled-In-Bond 11-Year-Old release this past spring, so I was very excited to see this one!” He noted that he also discovered King of Kentucky, BTAC, Kentucky Owl, Pappy, and more.

“As I scanned the selection and reviewed the drink menu, I noticed that most of the rare bourbons weren’t listed, normally a red flag for outrageous prices. But I was pleasantly surprised when the bartender shared them. In addition to reasonable prices--considering they were special releases and yes, rare--you could double your pour for just a few dollars more!”

Yes, please. And thank you.

Merle’s is a great first stop if you find yourself in Louisville, according to Josh. The bartenders are well-informed and accommodating: "We talked for a long time about recent arrivals, some of the favorites, the newly opened distilleries on Whiskey Row, and our bourbon hunting stories.” Josh tells us that the bartender that evening offered up the bottle for the Old Fitz photo below. We laughed when Josh observed, “The bottle is nicer than the bourbon. Just sayin’.” It is a nice bottle, and we definitely appreciate craftsmanship here at Prestige. 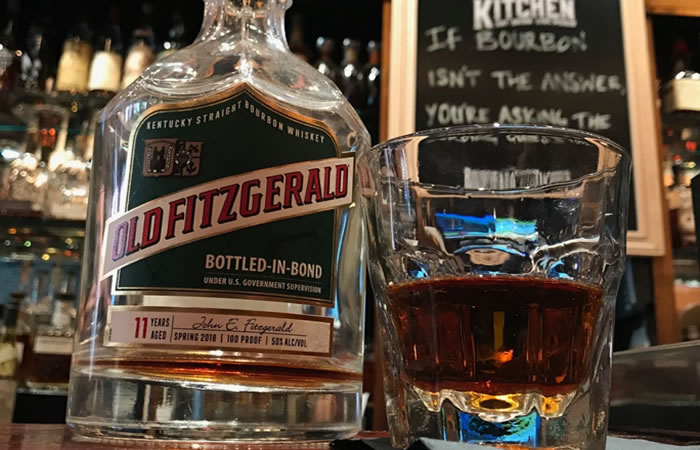 When you finally get your hands on the prize… [Photo cred: @kentuckybourbonjosh]

Dirk rounds out his top three favorites with Old Louisville Tavern. Maybe what’s best about this place is the “local pub feel.” He highlights a very nice selection of bourbon for really great prices. Further, he raves about the combination of great bar food with affordable bargain-priced rare bourbons. That’s the kind of experience we all love, right? Head over for the awesome atmosphere, good buys, and a memorable stop for sure.

Though Josh Salyer says that Merle’s is his favorite, he mentioned that The Seelbach Hilton in downtown Louisville made for an interesting stop on his recent trip. Though the selection was decent, he did note that the pour size was pretty small and pricey. But, he did enjoy getting a bourbon at this bar and exploring the historic hotel. He and his wife wandered around the Oak Room, where Al Capone was known to hang out. There were even underground escape tunnels!

Josh went on, "We also took in some cool architecture, such as the Rathskellar Room, in the Great Gatsby-inspired hotel. If you enjoy the sipping while sight-seeing, consider ordering their signature “Seelbach Cocktail.” 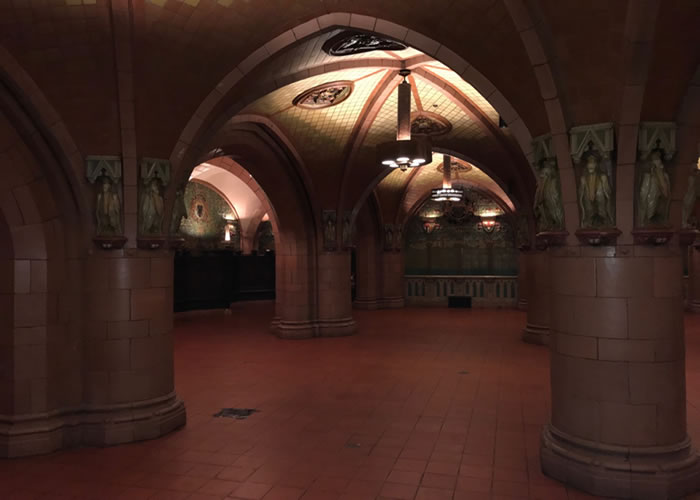 Justin helps us round out our ten best bourbon bars in Louisville. When visitors and locals alike ask him about planning a special occasion meal and/or about a fine dining option that offers a good selection of bourbon, his go-to is Proof on Main.

“This swanky spot is located downtown in the lobby of the 21C Hotel. First, the food is out of this world. Second, they have a bourbon menu that goes on for days. If you don’t see exactly what you want on the menu (basically zero chance of this happening), walk over to the bar and ask the bartender if they have any recent additions. They have a lot of single-barrel picks and special-release whiskeys that rotate in and out faster than they can update the menu. I had an off-the-menu Smooth Ambler Old Scout Rye the last time I visited, and it was unreal. I would suggest making a reservation, especially if you are trying to eat and drink at a peak time, such as on the weekend or a holiday.”

Sometimes, folks will ask Justin about a place with an awesome selection, unique cocktails, and a vibe that feels like an old-school honky-tonk or tavern. This is how he sings of The Silver Dollar:

“The selection is great, prices are fair, and the experience is going to be unlike any other place in town. They house-make all their syrups and bitters, which makes for some pretty interesting cocktail concoctions. I recommend the ‘Gold Rush’ if you are going with a cocktail.  It’s a simple cocktail that is very spirit-forward. You won’t be sorry.”

Justin admits he’s hesitant to even share this particular find and a regular haunt. Indeed, he wants it all for himself. But he’s willing to let us in on the secret. We thank you, man! You’re the real MVP. Oftentimes, people want to try a lot of different bourbons, but they don’t want to break the bank. Does an experience like this even exist? According to Justin, yes. It definitely exists. Pinch yourself, guys. This isn’t a dream.

“This place deserves to be acknowledged. Westport Whiskey & Wine is not only a top-notch liquor store but what most don’t know about it is the tasting room in the back. They have well over one hundred bourbons and whiskeys to sample, with little to no markup!”

“They basically charge you per ounce based on the overall retail cost of the bottle. It’s not a traditional bar environment, but the employees are all very knowledgeable. And the selection and prices can’t be beaten!”

We agree that places like this are hard to find. Go visit and enjoy! (You might even run into Justin, as he makes it a regular stop.)

Have your own favorite Bourbon Bars in Louisville?

All right, crew. You’ve heard about our must-visit bourbon bars in Louisville. Are we missing any? Tell us your personal favorites and finds in the comments below.

Keep (or start) planning that Louisville bourbon trip for sure. As you dream, strategize and make reservations, get in the Derby City spirit with a Mint Julep in the comforts of your own home. Check out our article - Mint Julep Recipe - Best Bourbons & Mint Julep Alternatives.