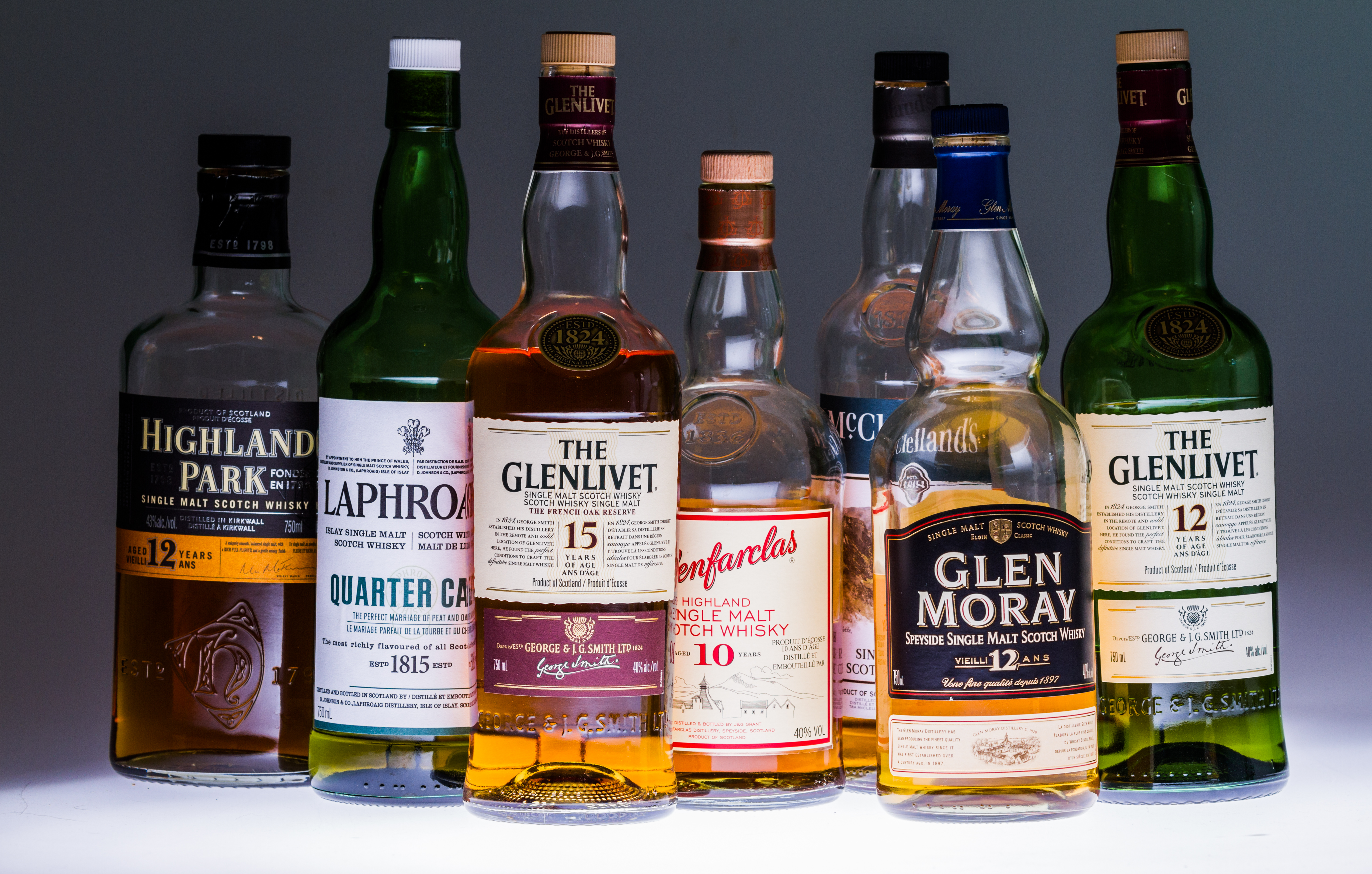 Go to the liquor store and look at the shelf full of Scotch bottles. To the untrained eye, it’s just a lot of different colored bottles bearing names that are difficult to pronounce. It’s hard to know where to start. Maybe you know your go-to bottle. But what if you want to try something different?

If you have these questions, then we have your answers. This article will give you a run-down of the best single malt whisky brands Scotland has to offer.

A Primer on Single Malt Scotch

You know what it is: single malt Scotch is one of the most sought-after whiskies in all the world. (If you don’t, here is a Scotch guide for beginners.)

Like all whisky, Scotch is made from grain, which is fermented, distilled, and matured. What makes Scotch different is that it is made from malted barley, which then goes through the same processes as most other whiskies. This process adds nuanced flavors, and its complex palate remains unique, compared to other whiskeys like bourbon and Irish whiskey.

But why is it called “single malt”?

For Scotch, “single malt” means that the whisky is made from one hundred percent malted barley that comes from just one distillery. There are also “blended” Scotch whiskies. These are crafted by combining whisky from different distilleries. Though blended Scotches have their own unique and complex flavors, single malt is still king.

Here’s one of the most important things you need to know when looking for the best single malt Scotch brands: there are different regions of Scotland.

What does that mean?

The taste of Scotch depends on the region where it is made. In Scotland, there are generally five regions: Islay, Lowlands, Campbeltown, Speyside, and Highlands. Scotch that comes from Islay is generally smoky and peated, while Lowland whisky is more on the light and delicate side. If you want a Scotch with less peat, try a Speyside Scotch. The Highlands produce a wide variety of flavors, ranging from peaty to light and airy.

The Islay region is located in the Hebridean islands off the southernmost Scottish coastline. This location gives the region’s Scotch a deep, smoky profile that tastes of the sea, specifically of iodine, seaweed, and salt.

Distilling whisky since 1815, this distillery on the south coast of Islay is known for heavy peat and smoke. Laphroaig is one of the best Islay Scotch whisky brands, not only because it is fermented from hand-cut peat and floor malted barley, but also because the distillers use cold-smoking kilns and age the whisky in oak barrels. Each and every stage is crucial in producing the most richly flavored of all Scotch whiskies.

Another Islay distillery, Ardbeg makes some of the best Scotch whisky ever. This distillery began selling whisky in 1815, using malted barley sourced from Port Ellen, which gives the whisky its signature heavy peat and smoky profile. Its whisky varies in flavor, from ripe fruit and honey to sherry cask finished. Ardbeg is intense but a great example of the Islay region.

At one time, the Campbeltown region of Scotland was the Scotch whisky making capitol of the world. Now, Campbeltown has three distilleries, all located just east of the Islay region in the south of Scotland. They produce lighter Scotch whisky that often has sweeter, grassy notes.

Founded in 1832, Glen Scotia is located on the west coast of Scotland and is a perfect example of what Campbeltown Single Malt has to offer. Glen Scotia is salt forward, with hints of chocolate flavors that give way to a lighter but slightly smoky flavor. Smoky, yes--but it is not as intense as the Islay whiskies.

Paradoxically called the “newest, oldest” distillery, Glengyle Distillery produces the Kilkerran brand. Operating as a distillery beginning in 1872, Glengyle closed its doors in 1925 and lay defunct until 2004, when new owners reopened it after 79 years. This distillery produces a range of Single Malt whiskies typical of the Campbeltown region, with rich, complex, and balanced flavors. If you are looking for something light but still nuanced, this is the brand for you.

If you are a beginner to Scotch, we suggest starting with Speyside whiskies. Why? Because Speyside Scotches are some of the more popular Scotch whiskies, particularly because they are light and easier to sip. The Speyside region is located in Northeastern Scotland and is home to the most distilleries in the country, each offering a variety of options with diverse palates.

The Glenlivet is a brand of Scotch whisky that everyone seems to know. In the Scotch world, it is iconic. As the first distillery in Speyside to gain legal status, the Glenlivet whiskies have been around since 1824, and became the most popular Scotch whisky sold in the United States by 1950. These whiskies are popular for a reason: they have bright tropical fruit notes, like pineapple and banana, which make them smooth and easy to drink.

It’s a tragedy: The Balvenie continues to be one of the more underappreciated single malts in the world. That is strange, because it is also one of the best distillers of single malt Scotch operating today. Being from the Speyside region, The Balvenie has some similarities to The Glenlivet, with fruity notes like orange. The Balvenie is also sweet, with a taste of honey running through most of the bottles.

The second largest region of Scotland, the Lowlands is home to several distilleries that have all showcased its unique flavors. This region is most associated with grain whisky that utilizes Lowland malt to produce a less intense flavor profile than any other region. Do not expect to taste any smoke in these whiskies. Instead, look forward to a light, grassy flavor with an edge of citrus.

This distillery has been in operation since 1823, and touts Glasgow as its inspiration. Auchentoshan wants to be thought of as progressive, while still holding onto the traditional ways of producing single malt Scotch. Look forward to tropical fruit and honeyed vanilla in their whiskies, along with nuts and dried spice.

Just fifteen miles from Scotland’s capital, Glenkinchie is home to the popular Johnnie Walker blended Scotch. But we’re talking single malt here. Founded in 1825, this distillery has been producing high-quality Lowland single malt for nearly two centuries. Drawing from the lush flavors of the Lowlands, this whisky is fragrant and light, a perfect example of its region.

Highland Scotch is as diverse as the land from which it comes--the largest region in Scotland. With a huge diversity of flavors, this area offers a Scotch for everyone. Notably, though, these are light whiskies with soft, smooth flavors that are characteristic of this region: grass, honeysuckle, cream, ginger, toffee, toast, and cinnamon.

This distillery boasts that it has the tallest stills in all of Scotland. With those stills, the distillery produces some of the finest Highland Scotch available. Founded in 1843, Glenmorangie has a long history of innovation, using different maturation methods. Look forward to bright, gentle whiskies from this distillery.

For 180 years, the Dalmore distillery has been honing its art and craft – though they date their origin back to the reign of King Alexander III in 1263 with the use of the 12-pointed stag on their labels. This distillery seeks to create complex Highland single malts, aging them in sherry casks, which adds nutty flavors to the chocolate and orange tones of their whisky.

There you have it – the best brands of single malt Scotch by region. Now you can go to the liquor store with the confidence of an educated Scotch enthusiast.

What brands would you include? Leave a comment down below.